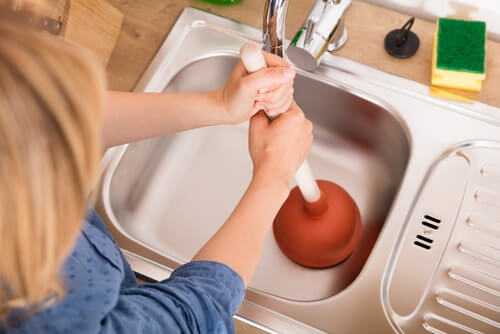 Recently, ‘Patricia’ from Armadale VIC found herself in a bit of a pickle, with a plumbing issue requiring urgent attention. Luckily, she did not hesitate in calling our team at O’Shea Plumbing. She reached Chelsea, in our Mt Waverley VIC office, who organised for our crew to have a look at her blocked bath.

Our plumber Andrew arrived on site and found an inspection opening out the back. He opened it up and found that there was water sitting in the pipe. He presented Patricia with options to fix the problem and she asked Andrew when he could start on the job. He said he could do so immediately. Patricia accepted the quote and Andrew went about unblocking her bath waste. Andrew managed to clear it pretty quickly and Patricia was happy once again.

Unfortunately, two weeks later Patricia rang up again and said this time her basin was blocked. Andrew arrived on site and inspected what was going on. The O’Shea Plumbing team dug down to found another inspection opening, this was a totally different blockage. Andrew said that he could get the drain going again, but was concerned that the frogmouth was full of roots and could potentially block again in the future.

Patricia said that she could speak to her Body Corp to see what they can do, but asked if Andrew could clear it anyway (as she would like to use her basin again). Andrew went ahead and performed the task, much to Patricia’s satisfaction. Patricia was so happy that, in both instances, she rang our headquarters at O’Shea Plumbing to report to our admin that our plumbers were on time, gave her notice and genuinely wanted to fix her issues.