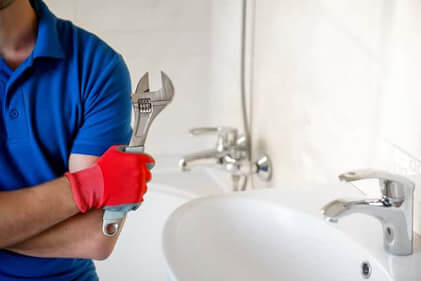 Campbell knows the history of his house, in Glen Waverley VIC, inside and out. Before he took over ownership it was his parent’s house. As such, he is aware of all the works that have been completed at the property, as far back as 1960.

He knows how long ago all the drains and pipes were installed and the approximate location. Campbell also has seen a slab of concrete drop in level putting pressure on the water pipes he knows are under the slab.

When Campbell noticed water bubbling up through the ground he contacted a plumber to come and repair it. Three weeks later he noticed more water coming to service (in a different location, further along the pipe) he again rang up a plumber who attempted to fix the broken water pipe again.

One month went by and Campbell thought he was in the clear. However, this was not to be the case. This time his plumber did not answer his calls and did not get back to Campbell! So instead he called up our O’Shea Plumbing Mt Waverley VIC headquarters. Reaching Chelsea, he received prompt attention.

Andrew arrived on site and retrieved the history of the plumbing. This included the year that the existing water pipe was installed. Campbell also mentioned to Andrew that he was worried about the concrete slab that was sinking and putting pressure on the pipe/s underneath.

Andrew went back to his van in order to source some solutions to offer Cambell in fixing the issue. This is a very important step in the O’Shea Plumbing process. The idea is that our plumbers will give options to the client in fixing an issue ranging from a very basic fix to perfect installations (in an ideal world).

This gives our clients all the information they could possibly want, allowing them to make the most informed decision on how they would like to go about fixing any plumbing issue.

At the end of the day, the option that Campbell inevitably selected is not the point. Campbell regained control of his plumbing issue once he received viable pathways of action in planning for the future structural integrity of his family home.

Andrew ordered the materials from the ‘Plumbers Supplies Coop’ in Mitcham VIC. He  organised an excavator from ‘RMR Plant Hire’ in Bayswater VIC and fixed the issue, according to the exact way that Campbell wanted.