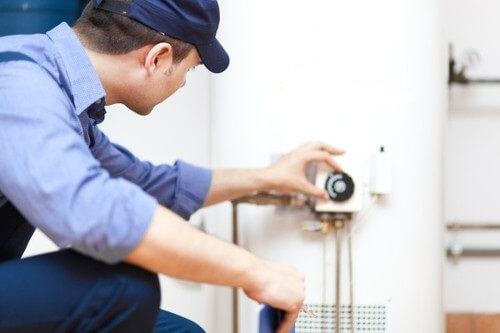 Some time ago, ‘Michelle’ from Hampton VIC contacted Chelsea at O’Shea Plumbing. She reached out to our main office in Mt Waverley VIC. Michelle was struggling with the fact that she has not had a proper hot shower in three days. It was at best a lukewarm shower, which on a cold Melbourne winter’s morning is not the most appealing thing to get out of bed for!

When Andrew (an O’Shea Plumbing team member from the Bentleigh Vic depot) finished his job in Moorabbin VIC and was notified to drop into Michelle’s house. He was able to fit in a visit before heading off to install a new toilet in Armadale.

When Andrew arrived he looked around the house to see if there was anything that appeared obvious to him as a source of the problem. There was nothing visibly untoward.  However, Andrew noticed that the hot water pipe went from the hot water unit (HWU) and into the roof. He decided he would go up there to investigate.

Andrew provided a quote to replace the tempering valve. This made sense, as it was the incorrect one in the first place. Additionally, Andrew noticed that one of Michelle’s mixer taps was leaking causing a nasty looking stain on her otherwise pristine porcelain basin. Andrew provided options to fix this and asked if there were any other issues that Michelle wanted him to look at.

All in all, Andrew provided options on a new tempering valve, fixing the mixer tap, investigating the diverter kit for their shower, a new flexible hose from the shower outlet to the shower outlet, as well as water pressure control (to protect and/or minimise the chance of these things happening again for a long time).

Andrew went back the very next day and completed the works. Michele and her family were very happy that not only their major plumbing issue was dealt with quickly and professionally but that all other existing and potential issues were taken care of at the same time.

For reliable plumbers Melbourne and Hampton locals can rely on, call the team of plumbing experts at O’Shea Plumbing on (03) 9888 2887