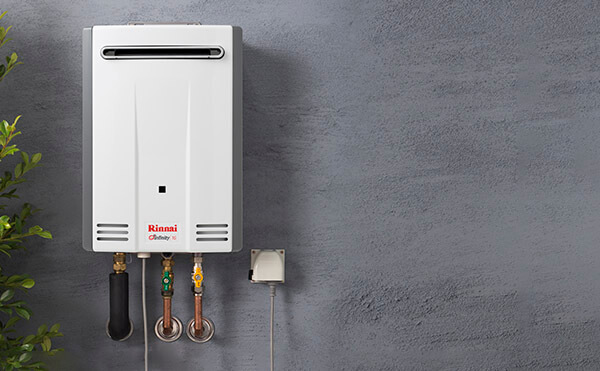 Michael had an older Aquamax storage hot water unit which at the time didn’t have any issues but was getting to an age where parts of the hot water unit may begin failing. Michael requested a plumber come to his house in Rosanna to discuss upgrading his Hot Water Unit (HWU).

Andrew arrived onsite and introduced himself and O’Shea Plumbing, and explained to Michael his agenda of how he proposed this service call to go.  Michael and Andrew were discussing the pros and cons of both replacing the existing storage HWU and a Continuous Flow HWU.

Michael decided that he wanted to install a new Rinnai B26 Continuous flow HWU. Andrew ordered the materials from the Plumbers Coop in Mitcham, including a larger, copper gas pipe to allow for a greater flow of gas ensuring that the new HWU would work to its fullest capacity.

Andrew arrived a couple of days later and proceeded to drain the old storage HWU and completed a gas pressure test to make sure that there were no existing gas leaks. Once these small jobs were done all necessary materials had arrived on site. Andrew climbed under the house to run a new copper gas branch from the gas meter all the way to the new Rinnai B26 continuous flow HWU. He clipped the new branch gas pipe to the underside of the floor joists to support the new gas pipes off the ground, away from potentially damaging elements.

A licensed electrician was also organised to come onsite to install a new external power point outlet to supply power to the new HWU. Once the new gas pipe was run, the power supplied and the Rinnai B26 installed into position, Andrew connected all water pipes and commissioned Michael’s new Hot Water Unit.

All gas pressure tests were completed including a 7KPA gas pressure test of the new capped off gas pipes, which were tested for a period of 45 minutes. This had no pressure drop which says that there will be no gas leak in the main run and branches of the gas pipe. A 1.5KPA pressure test was also completed before and after work was completed, with all appliances connected, which told Andrew that the gas appliances also had no gas leaks.

Andrew also mentioned to Michael that his water pressure was too high and provided Michael with some options to supply and install a pressure control device at the water meter to limit the water pressure to 500KPA. If Michael chose to go ahead with the quote it would provide longevity to all water fixtures, as well as reduce the chance of hearing water hammer throughout the house when taps are used, especially at night time when the water pressure spikes.

All in all, Michael was very happy that he did not have to go days without hot water and that the job was completed to a high standard. Nice work, Andrew!

Whether it’s a repair or an entire hot water unit replacement, O’Shea Plumbing is committed to providing all hot water maintenance Melbourne wide. For reliable plumbers Melbourne locals can rely on, call the team of plumbing experts at O’Shea Plumbing on (03) 9888 2887