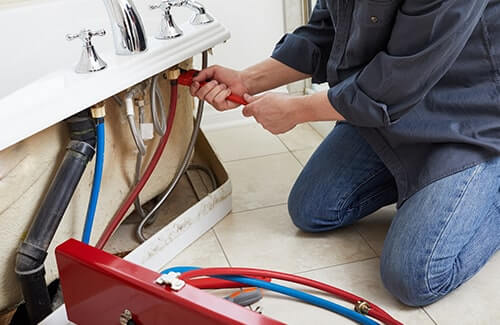 Naturally, sewer blockages can be quite disturbing for clients. They often involve raw sewerage flowing into people’s back yard and other areas. This presents a substantial health risk. There’s also the potential for a very nasty smell, especially on a warm summer’s day!

The longer a blockage is left unattended, the harder clearing the sewer becomes. Solids (including tree roots) build up over time. A plumber will have to do more work to clear the site. However, that’s not to say it can’t be done.

Recently, ‘Lawrie’ (our O’Shea Plumbing founder who resides in Wantirna VIC) received a call from ‘Shiela’. Shelia is based in Mt Waverley VIC, and called our office late on the evening preceding Mother’s Day.

Lawrie asked Shelia if she wanted somebody out that evening to attempt to clear the blockage. Her reply was “can it wait till morning?” Shiela had another toilet that was not blocked that she (and her visiting family) could use.

Lawrie instructed our plumber ‘Andrew’ to head over to Sheila’s house. Upon arrival, Andrew started an investigation around the house to determine which fixtures might be blocked and to locate the most likely site of the blockage. He presented this information to Sheila to guide the work ahead.

Andrew received approval from Shiela to proceed with using his sewer cable machine to attempt to clear the blockage. Andrew ran the cable to the point of 7m. At this juncture, the machine started to struggle to cut through (what he thought to be) the blockage.

Andrew worked the machine a little bit further down the sewer and started to bring the cables back out again. He retrieved a length of tree root of about 2m long by 70/80mm in circumference. It was evident that this tree root was the likely cause of the blockage.

Andrew used the same cutter to run the cable all the way to the sewer point location with ease. This is in the jurisdiction of the local authority, which plumbers are not allowed to enter. Andrew used a spearhead cutter, 75mm cutter and 100mm cutter. This cleared the drain cleanly and completely.

At this point, Andrew voiced concerns that there was something more sinister going on in the sewer due to the large amounts of tree roots. This has either occurred over many many years, with Shiela not noticing. Or, it was because the initial signs of blockage were largely ignored. These indicators include a gurgling noise as water drains, water rising higher than usual in the toilet pan when flushing, or even toilet paper/grey water coming out of the drains next to your house.

Shiela said that she was happy that Andrew cleared the sewer blockage. He reiterated his concerns. She said if she noticed the sewer becoming blocked again that she would call O’Shea Plumbing and ask for Andrew. The next stage would be to put a camera down the drain to inspect the quality of its construction. It’s this level of customer care that makes O’Shea the trusted choice in local plumbers.