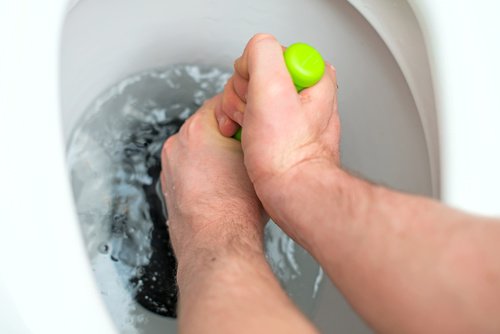 When David and his son came home from cricket on a Saturday afternoon they were not pleased to find that their downstairs toilet was threatening to overflow. David decided that he should call his local plumber immediately.

Andrew from O’Shea Plumbing arrived half an hour after the initial call to investigate what was going wrong with their toilet and sewer. He quickly found that all fixtures were being effected and were not draining properly. This indicated to Andrew that he should be looking outside as that’s most likely where the issue was.

Andrew gave Yarra Valley Water in Mitcham Vic a call to find out the exact location of David’s sewer point. Andrew was advised that David and his neighbour shared a sewer point which was located on next door’s property. This is common in some suburbs, including Mt Waverley.

Once Andrew had a solid plan, he presented David with the options to resolve the problem. David decided on the option which involved Andrew using the large sewer cable machine to make an attempt to clear the sewer drain blockage.

Andrew worked his cable machine through the drain, removing a few sections of clumped tree roots. All of a sudden, there was a gushing noise and all the water that was sitting in the drain evacuated and ran into the authorities sewer mains.

The blockage was cleared but Andrew not only wanted to clear the blockage, he wanted to clear the sewer to avoid further blockages occurring. So, he upsized his cutter on the cable machine to 75mm and ran the cable through again, then repeated the process with a 100mm cutter the exact size of the drain. This cleared the drain to the correct size and left minimal – if any – tree roots in the drain which toilet paper could catch on creating another blockage.

Andrew was able to give David a 1-year blockage-free guarantee on the section of drain that he worked on. David was very happy that he was able to use his toilet and other fixtures again within two hours of calling the O’Shea Plumbing weekend base in Bundoora.