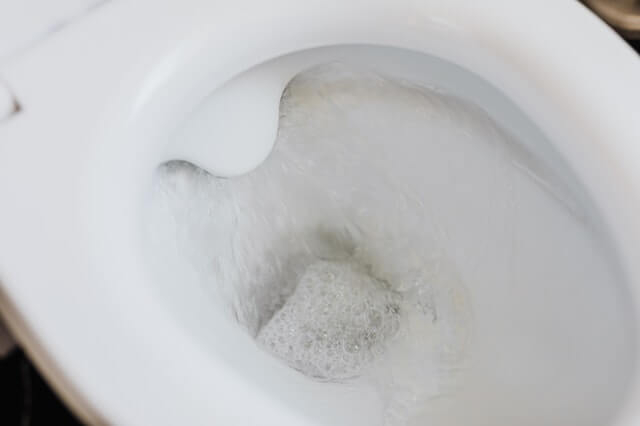 Accountants of Wheelers Hill noticed one of the toilets in their office suite was draining slowly when flushed and called O’Shea Plumbing to come and have a look at a potential blocked drain. Jeremy (O’Shea Plumber) arrived and started his investigation into what could be causing the issue.

Jeremy checked the urinal and basin next to the affected toilet as well as the other restrooms in the office. Finding no issues with any other fixtures, Jeremy decided the best course of action was to attempt to use a plunger to clear the blocked drain. After several unsuccessful attempts with the plunger, he decided to remove the toilet and use a drain camera to investigate further what may be causing the toilet to be draining slowly.

Lawrie then thought that the toilet draining slowly could have something to do with how the drain was constructed. While pulling the camera back out, Jeremy and Lawrie could see that immediately after entering the wall the drain went into a 90 degree swept junction instead of a 45 degree junction. This could potentially be the cause of the slow draining toilet because the shape and angle of the drain did not allow the water to flow quickly and efficiently. Before reinstalling the toilet, Jeremy checked the outlet of the toilet to ensure that there was nothing in the toilet itself that could also be causing the issue.

After reinstalling the toilet, Jeremy and Lawrie tried flushing it again and found that it was still draining slowly. They determined the cause was simply the design and construction of the drain, and the only way to truly rectify the problem would be to redo sections of the drain.

As the situation did not prove to be urgent or potentially harmful, the plumbers assured the Accountants that they could leave the toilet as is, however, they also gave them options for re-doing the sections of the drain if they wished to pursue a fix.

If you want a fast quote on your plumbing problems, call the team at O’Shea Plumbing. O’Shea are the plumbers Melbourne can rely on. Contact our team any day of the week on (03) 9888 2887. We’ll come running!